Edit
watch 01:36
We're Getting Mutants in the MCU - The Loop
Do you like this video?
Play Sound

Willona Woods is one of the main characters on Good Times. The part of Willona was played by the late Ja'Net DuBois.

Willona is one of the neighbors of the Evans family, and a close family friend. She's also the eventual adoptive mother of Penny Gordon Woods. Independent, generous, and always up for fun, Willona can also be nosy at times and a little gossipy, but as Florida's best friend, Willona is always there with a helping hand in good and bad times. A divorcee sporting fashionable clothes and slinging unabashed advice, Willona juggles a variety of jobs while maintaining an active single life.

When she meets Penny, and she and the Evans Family learn her birth mother, Linella Gordon abuses her, she doesn't hesitate to adopt her and love her as her own daughter. When Linella returned and tried to hurt Penny for upsetting her, Willona grabbed her arms and slammed her against the wall. Penny chose Willona as her mother. Devastated, Linella respected Penny's decision and left, and was never seen again.

As an honorary member of the Evans household, Willona is the steady tower of strength that everyone can rely on. In the final episode, after learning Thelma and Keith are expecting a baby, she's overjoyed at becoming a godmother and that she, Penny, and the Evans Family will remain neighbors. after moving into a new apartment building. 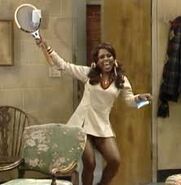