Donald James Marshall (born May 2, 1936) appeared as FBI Agent Lloyd in the Season 3 episode Good Times titled "The Investigation". Don is best known for his role as Dan Erickson in the television show Land of the Giants. 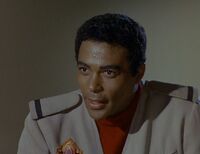 He was one of four children and was schooled at San Diego High School. He was studying engineering between 1956 and 1957, and was encouraged to try acting by a friend, Peter Bren. Marshall was still in the army at this time. He studied acting at the Bob Gist Dramatic Workshop, while studying Theatre Arts at Los Angeles City College.[1]

Marshall has provided consultation on matters connected with his work and with racial issues, and has received an award for "Outstanding Achievement in his field as a Black Achiever in the United States".[2]

Marshall's first professional role was in a 1961 Columbia Studios feature The Interns. In 1964 he took the role of Chris Logan, playing opposite Nichelle Nichols in Great Gettin' Up Mornin', a TV production about an African-American family preparing their children for their first day at a racially integrated school in America's south.[3]

In 1965, Marshall appeared in a pilot for a series Braddock. In 1966 he appeared as Luke in Daktari, in the episodes Predator of Wameru, The Killer Lion and Trail of the Cheetah.[4]

Later in the 1960s he appeared in Star Trek and he became known for his portrayal of Lt. Boma in the episode "The Galileo Seven". Other TV series he appeared in were Tarzan, Dragnet 1967, and Ironside. In 1968 he appeared as Ted Neumann, the recurring love interest of Julia Baker, in the television series Julia, a series about an African-American widow raising her son on her own.

Don had a role in the 1971 film The Reluctant Heros AKA The Egghead on Hill 656, a film that was directed by Robert Day. This was a war film set in the Korean War with men under a newly commissioned lieutenant who are trapped on a hill surrounded by the enemy.[5] His character as Pvt. Carver LeMoyne was subject to continual racial abuse by Cpl. Leroy Sprague played by Warren Oates. The film also starred Ken Berry, Jim Hutton, Ralph Meeker, [[Wikipedia:Cameron Mitchell (actor)|Cameron Mitchell and Trini Lopez.[6]

In the seventies he set up his own company called DJM Productions, Inc., which produced television commercials and documentary films.

In the 1980s, Marshall had few roles, appearing occasionally in episodes of Little House on the Prairie as Caleb Ledoux, as Doctor Jim Blair in Finder of Lost Loves and as Senator Ed Lawrence in Capitol.[7]

In 1992 he played the concierge in the Paul Schneider directed TV drama Highway Heartbreaker.[8]

Once married and divorced, Don resides in Southern California.

Community content is available under CC-BY-SA unless otherwise noted.
Advertisement